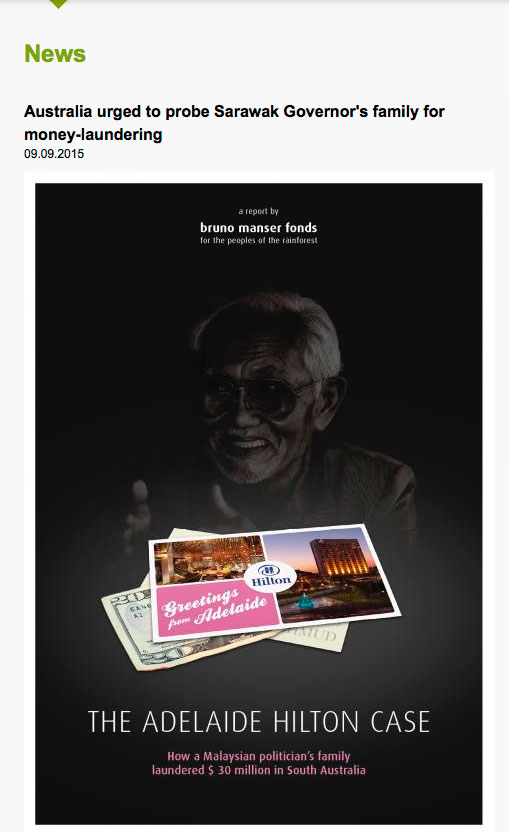 In a report by the Swiss-based Bruno Manser Fund, Australia has been implicated with the activities of Sarawak's multi-billionaire Taib family.

The Australian Government has funded the logging practices of Ta Ann in Tasmania's native forests. Ta Ann is one of Sarawak’s biggest timber companies and is Taib family-owned.

'Now comes these allegations by Bruno Manser Fund about another branch of the Taib family exporting its ill-gained wealth to Australia through the purchase of the Adelaide Hilton.

‘The Bob Brown Foundation is calling on the Australian Government to pursue full disclosure of the alleged money laundering activity by the politically prominent Sarawak entities as revealed by Bruno Manser Fund’s  report into the Adelaide Hilton case,’ Jenny Weber said.

'Australia needs to investigate these allegations of money laundering, tax avoidance and corruption. It should ensure higher levels of transparency in the activities of the Taib family in this country,’ Jenny Weber said.

‘The Australian Government watchdogs have shown a reluctance to crack down on international tax avoidance and corruption by wealthy private companies and individuals in favour of facilitating business. Yet the Malaysian state of Sarawak has been an epicentre of corruption, displacement of indigenous peoples, abuse of human rights and globally significant deforestation’, Jenny Weber said.

‘The money trail from Sarawak’s relentless logging industry and dam-building expansion needs to be questioned with rigour in this country,' she said.

The Bruno Manser Fund report is available for download here.