From Shenhua to Paris via the Tarkine 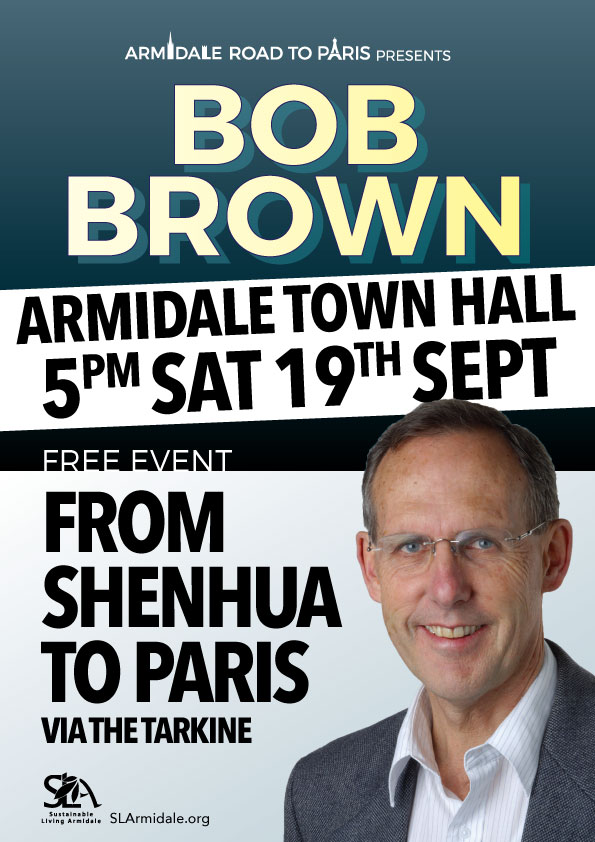 Former Senator and Parliamentary Leader for the Australian Greens, Bob Brown, will be speaking at Armidale Town Hall on the 19th of September, as part of SLA’s initiative, Armidale Road to Paris.

Bob Brown, now heading the The Bob Brown Foundation, will give an hour talk titled “From Shenhua to Paris via the Tarkine”.

This free event is just one of many initiatives by Sustainable Living Armidale’s Armidale Road to Paris which aims to generate local conversation in the lead up to the UN Climate Summit in Paris later this year. Armidale Road to Paris is holding a number of events and initiatives, with the objective of collating and sending a strong message to Australian delegates at the Summit that Armidale supports the aim of a binding agreement amongst all world leaders to keep global warming below two degrees.

Convenor of Sustainable Living Armidale, Iain Mackay states “We are excited to have Bob Brown visit Armidale and talk about an issue that impacts everyone, including wildlife and future generations. Leadership is more important than ever right now, and we are fortunate to have Bob Brown, with his experience and vision, speak”.

Bob Brown is an acclaimed author, photographer and lifelong activist. After 10 years in the Tasmanian Parliament, Bob was elected to the Senate in 1996 where he served for 16 years.  He was leader of the Australian Greens from 2005 to 2012, when he retired from the parliament to establish the Bob Brown Foundation.