Ancient rainforests and tall trees in the Frankland River forests, in the north west of the Tarkine, are still standing thanks to two years of frontline action. More than 250 citizens joined our vigil camp from February to June this year.  For two years the loggers have wanted to destroy these rainforests and tall eucalyptus forests but our Foundation and citizens have intervened to stop them. We moved into the forests in February 2017 and again in 2018. These forests have now been vacated so the endangered Wedge-tailed Eagles nesting there can breed. 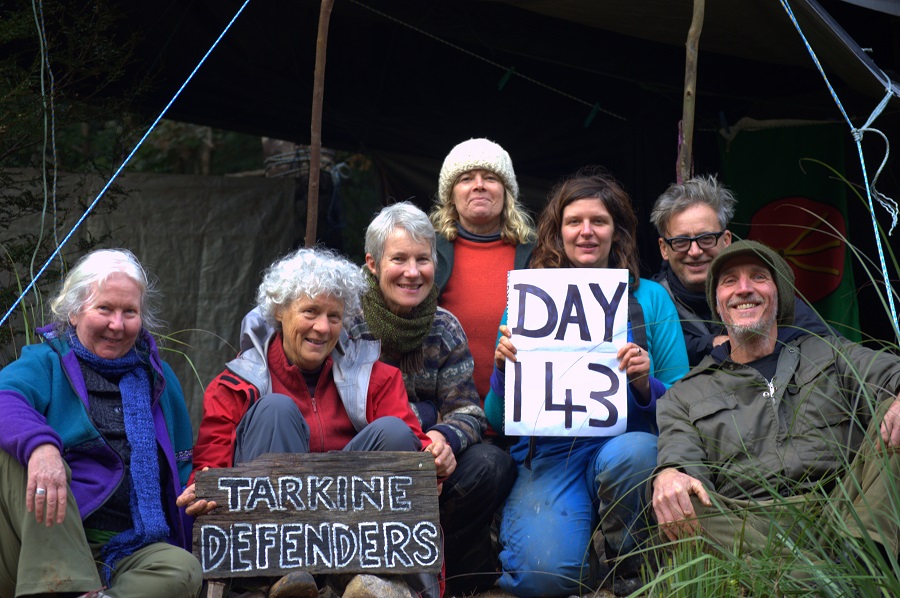 Here is a photograph of some of the Tarkine Defenders celebrating day 143 in camp.  Just a few more to go until the camp was another success at halting the logging for the season.

With two endangered Wedge-tailed Eagle nests in the proposed logging area, a logging exclusion zone will be in place from July 2018 until January 2019 to allow the eagles to breed. If the loggers return in February 2019 our Foundation will be back to stop them once again,” Jenny Weber said.

For now, this forest home for eagles, quolls, wombats, owls and the world’s largest freshwater crayfish is safe. However, the State Government’s logging agency has today released their new three-year logging plan for Tasmania. These Frankland River forests are still on the logging schedule, as well as 1000 hectares in the Tarkine including rainforests and wildlife-rich tall eucalyptus forests.

Sadly we have lost ancient rainforests elsewhere in the Tarkine this year and logging continues, despite our protests calling for their protection. Enough is enough - the Tarkine and Tasmania’s unique native forests need protection for wildlife, environmental, economic and climate benefits.