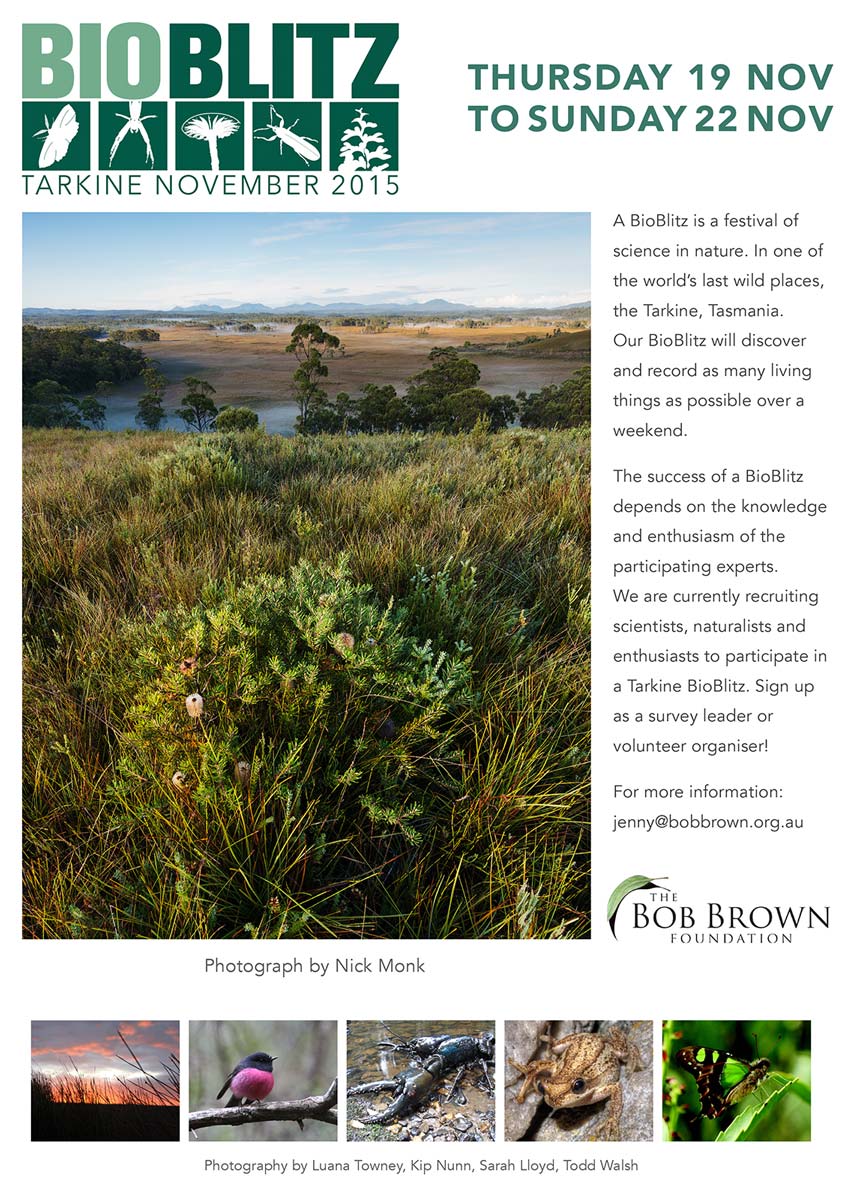 A BioBlitz is a festival of science in nature. In one of the world’s last wild places, the Tarkine, Tasmania. Our BioBlitz will discover and record as many living things as possible over a weekend.

The success of a BioBlitz depends on the knowledge and enthusiasm of the participating experts.

The BioBlitz program is now available below

Book and pay for your BioBlitz accommodation and/or meals here.

Choose which BioBlitz Field Surveys you would like to participate in here.

Dr Peter McQuillan - Senior Lecturer at the University of Tasmania in the Discipline of Geography & Spatial Sciences (School of Land & Food). I am an entomologist with a keen interest in the diversity of invertebrates and their conservation in both natural and agricultural landscapes. Through fieldwork and experiments I have contributed to expanding our knowledge of insects, in particular, their function in the environment and their use as indicators of habitat change. I am currently working on pollination ecology and also the interactions between plants and the insects that feed on them. Students I currently supervise are working on the ecology of moths, ants and beetles.

Frank Bird - Frank is currently undertaking a bachelor of science at the University of Tasmania. Frank has been involved in a variety of fauna surveys throughout Australia and even found himself catching butterflies for a friend’s research project in Bulgaria. Last year Frank was fortunate enough to assist in biodiversity surveys in the Simpson Desert, Tanami Desert and the Kimberley.

Rodolfo Maia - an Environmental Scientist that work as Park Ranger for Parks Victoria. The park that I manage is Brimbank Park, a huge park in the middle of the Western suburbs of Melbourne, surrounding by lots of houses and factories. One of the features of the park is the Maribyrnong River, the second bigger river in Melbourne. As part of my job I do environmental education with kids during school holidays, school groups and homeschools. A little bit about me, I am from Brazil. I came to Australia 7 years ago, I like to go surfing and camping in my spare time. The most beautiful animal that I have seen in Australia is the Red Belly Black Snake because it has the same colour of my hometown soccer team.

Sarah Lloyd - Sarah Lloyd is a naturalist, writer and photographer who has been fascinated by Tasmania’s birds since early childhood. She writes regularly about various aspects of the natural world and has recently written several books including Where the slime mould creeps the fascinating world of myxomycetes published in 2014 and her most recent The Feathered Tribes of Van Diemen’s Land, published in November 2015. For nearly 30 years Sarah and her composer partner, Ron Nagorcka, who shares her interest in the natural world, have lived in a forest in Northern Tasmania where they have been able to pursue these passions to their hearts’ content.

Patrick Dalton - B.Sc (Hons), Dip.Ed., M.Sc (Tas) - is currently lecturer in botany at the School of Biological Sciences, University of Tasmania. His teaching specialises in the diversity of non-flowering plants (bryophytes and ferns) and his excellence in teaching has been recognised in University and National awards.

Paddy’s passion for the study of the taxonomy and ecology of bryophytes has taken him on extensive field work across Australia and New Zealand and he has actively promoted bryology through his editorship of the Australasian Bryological Newsletter for 19 years. He has studied at the Natural History Museum, London, Institute of Systematic Botany, New York Botanical Gardens and has published in collaboration with Australian and overseas bryologists.  Paddy was invited to participate in the NSF expedition to The Cape Horn Archipelago in 2013 and this provided the unique opportunity to complete a study of bryophytes across the gondwanan landscape.

Dr Richard Donaghey has spent his working life in agriculture, horticulture, conservation biology, and wilderness and forest conservation. My passion for birds and plants was kindled as a young boy in Sydney. I studied the ecology and evolution of bowerbird mating systems for my PhD. In north-west Tasmania I monitor birds in rural bush remnants and rainforest. Since ‘retirement’ 15 years ago my partner Carolyn and I have studied the behavioural ecology of Australasian robins throughout Australia. From 2011-2014 I conducted four expeditions to Papua New Guinea and West Papua studying the parental care of endemic robins, bowerbirds and birds of paradise and am an adjunct research fellow at Griffith University.

Deb Wace is a plant advocate and professional Printmaker whose artwork is highly detailed and intimate, it is a window into the botany of Tasmanian native Orchids, and Buttongrass plant communities. She uses Drypoint and Monoprint techniques to depict the native orchids large upon the wall. She also uses pressed plant specimens sourced from and illustrating the diverse flora of the Buttongrass plant communities. Deborah will be collaborating with the other scientists, especially botanists, to compile a herbarium of plant specimens from the whole Tarkine, and using her portable printing press to make an illustrative body of work. Join in, as no previous experience is necessary.

Louise Manka – Educator. Worked as a Zoologist at the Queen Victoria Museum and Art Gallery from 1990 - 1997 and during this time introduced many new live displays such as Giant Cockroaches, Lizards and Spiders. Author, 'Common Venomous Animals in Tasmania' with Dr Paul Pielage. Creator and editor The Invertebrata Newsletter, 1994 – 2001.

Helen Keenan - studied palaeontology, ecology and botany at Macquarie University, and completed a PhD on the recent palaeoecology of subantarctic Macquarie Island, using diatoms as indicators of environmental condition. Helen has worked for the NSW government as an aquatic ecologist, managing freshwater algal blooms to minimise their impacts on people, and using algae as indicators of river health. Helen is currently looking at using attached algae as indicators of the health of the Nepean River, west of Sydney, as part of a larger program that is looking at the benefits of introducing environmental flows from Warragamba Dam.

Joanna Lyall - Ecologist and naturalist. Has a passion for the Tasmanian natural environment and its unique inhabitants. Works as an environmental consultant specialising in management of native vegetation to maintain and enhance biodiversity and protect threatened species, including our unique freshwater crayfish species.   Currently undertaking a Masters degree in Zoology, studying the relationships between the Tasmanian devil, spotted tailed quoll and feral cat and their preferences for particular habitats. 150 sites across North west Tasmania were surveyed during winter 2014 and summer 2014/15 using motion activated cameras left in-situ for 21 days each time.   With husband Jim, Joanna breeds Dorper sheep on 47 acres in Glengarry Northern Tasmania, where they have recently shifted after 29 years at Upper Natone, NW Tasmania.

Stuart Rose Bachelor of Science at the University of Tasmania. I have a significant passion for the natural world (particularly entomology and botany), and have been involved with various projects such as cataloguing the Warra database collection, at TMAG over the last year. My passion for entomology has allowed me the opportunity of working alongside other enthusiastic scientists from the CSIRO, assisting research into colony collapse disorder and micro-chip bees!

Anna Povey has an environmental consultancy, Bush Matters, providing flora and fauna surveys, bush management plans and environmental education.  Past research included a masters on small mammals on farmland, and honours on trampling effects on rocky intertidal shores, reflecting her interest in ecology and how we can better live on this planet.  She is a generalist, with skills in botany, birds and native plant propagation, and is currently improving her identification of scats.  She and her family also really like riding bikes.

Craig Broadfield – Craig is a naturalist, horticulturalist, historian, writer & photographer and for the past 26 years, an antique dealer based at Ulverstone.  Cert. of Hort. & former TAFE teacher.  Former Dev’t Orchid Society Pres’t & foundation member of ANOS NW branch.  Founder of the 650+ Member Tasmanian Native Orchid FaceBook group &  TPT volunteer.   Craig’s current interest is Tasmania’s only epiphytic orchid, Sarcochilus  australis of which there is still much to be learned.  In 2014 he began the ambitious task of mapping a population near Narawntapu National Park, NWC.  As one of the largest and most vibrant populations in Tas & ecologically vulnerable, Craig is endeavouring to achieve greater protection for the colony.  While undertaking his survey work, Craig discovered and mapped the largest and most westerly known population of the Category 5 endangered species, Pterostylis grandiflora.  This has compounded the desire to have this area set-aside.  His work continues.

Christopher Carr is an Entomologist with a special interest in insect conservation and beneficial insects in agricultural landscapes. Having taught insect-plant interactions at UNE and co-hosting annual “Insects at Night” presentations at the Woodford Folk Festival, he has previously worked at the NSWDPI for 12 years and is currently writing up his PhD and is an IPM consultant for the Northern Rivers Macadamia industry and adjunct at Southern Cross University.