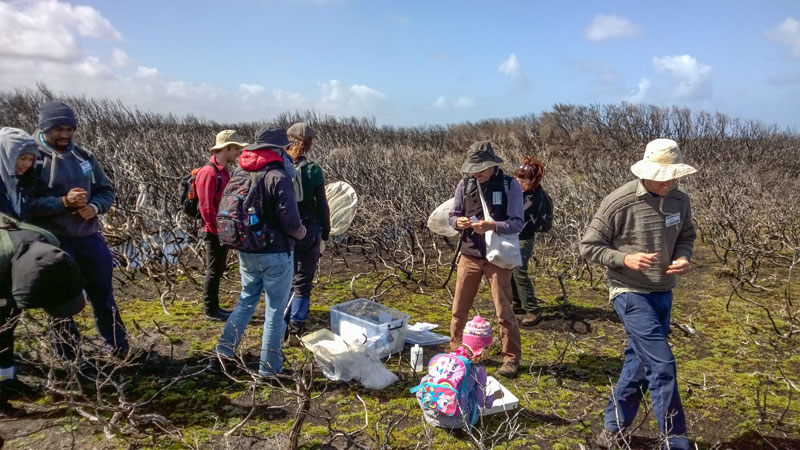 We stood in a blackened patch. The scrub that had once stood there had been burnt down to charred sticks. The sandy soil was bare, apart from a few brave patches of green. “We will start here” said Christopher, our entomologist leader. There were some doubtful shuffles amongst the group as the specimen vials were passed around, but we started searching in earnest.

We found an ant. Christian, our ant expert looked mildly interested. I spotted a second, expecting him to dismiss it as the same as the first, but it was a different species! Christian pointed out the seeds around the entrance to its nest, and if I looked I could see the telltale pile of seeds all over. A few minutes later and we had spotted 3 more species, all small and black. Then I spotted an inchman. Christian looked excited and snapped it up into his vial quick smart. He started speaking of an elusive ant he wanted to see, an iridescent blue and green species never before confirmed in Tasmania. Just as I was contemplating this Christopher called time. Vials were labelled and the field box was heaved on to the next site. Not such a bad haul after all.

On route I trailed at the back looking at the small things. The carnivorous sundews were in flower. Someone spotted a leech. We didn’t collect it. Abbey, our moth expert, waved her net, catching a beautiful butterfly. So, so delicately she prised it from the net, taking care not to brush the tiny scales from its wings. She told me of moths that feed on moss. An energetic participant caught a flame coloured moth and presented it to Abbey as a gift. I could have wandered all day but we had invertebrates to collect.

At our second site we snapped into gear. We divided into groups, each to collect invertebrates using a different collection method. There were soon nets being waved, shrubs whacked with sticks, leaves inspected, water sieved and some very serious operations with tiny paintbrushes taking place. Slowly our vials were filled, to be taken back to our base camp lab for identification. What weird and wonderful things were in those little tubes I wondered as we finished up for lunch.