Slice of Camp Life at the Tarkine BioBlitz

Arriving back at camp after a day in the field has a festive atmosphere. Walking through the camp everyone is swapping stories and looking just a little sunburnt after the day out. “What did you see today?” everyone is asking each other. Clare Hawkins, looking chuffed, proudly shows me photos of the Giant Freshwater Lobster they had caught that day. “So blue!” she says, muttering “such a great day” as she scrolls through the pictures. I move on to have a shower and little sit down before dinner.

Meanwhile in the data room the work has just begun. With the data management team working alongside scientists to identify and document the day’s finds. There are trays of leaves, laptops, microscopes, vials and very serious faces in there. A screen shows a slideshow of orchids found that day. Rumours emerge from the room that a species of wolf spider new to science has just been identified. 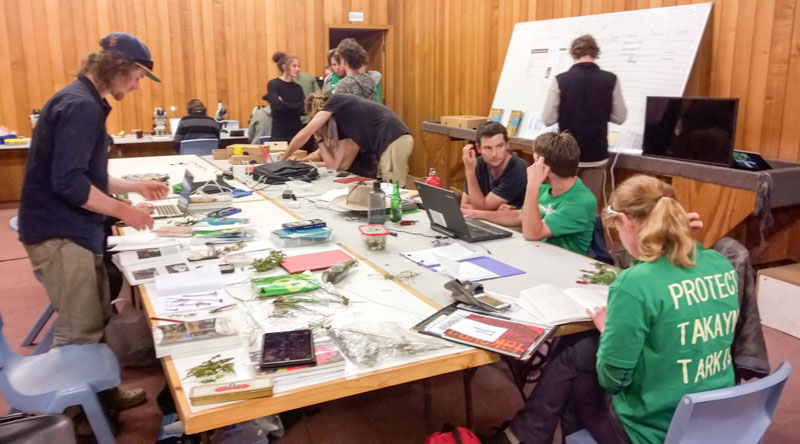 The dinner bell rings and the dining hall erupts. A tiny kitchen crew has been working all day to churn out enough food to feed over 100 people. There’s dumplings, soup, very garlicy garlic bread. We’re onto the amazing strawberry kissel dessert when Scott Jordan walks in and bellows above the chatter “anyone wanna see a wombat?” As promised his wife had arrived with a posse; the wombat, some wallabies and a ringtail possum.

Some rush off to see the wombat while others start gearing up to head out for an evening of spotlighting. They are hoping to see an owl. There’s a feeling of anticipation as the crew boards the bus, head-torches around necks. The camp starts to wind down for the night, a few wander off to bed while the rest settle in for the evening talks. Fire ecology, orchids, soil. An amateur field naturalist’s dream. Time to sleep in my tent by the creek and do it all again tomorrow!