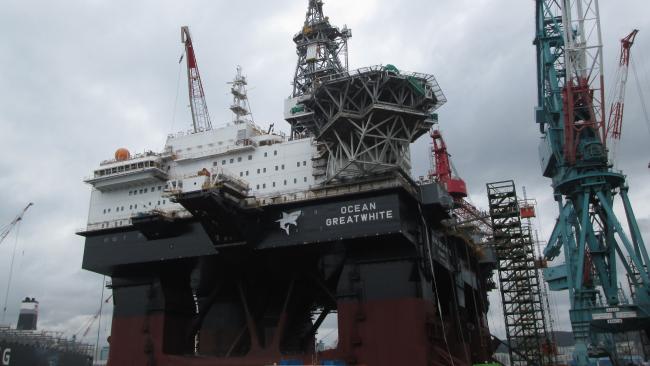 A massive oil rig is in its way from South Korea to the pristine waters of the Great Australian Bight, courtesy of Labor and the Coalition. It is opposed by the Greens. If BP Petroleum has its way the rig will be in place to drill beneath waters 2000 metres deep, looking for oil and gas, in similar mode to that which led to BP's Deepwater Horizon well oil spill in the Gulf of Mexico in 2010.

BP's application to drill in the whale-filled waters of the Bight has been knocked back twice by the National Offshore and Petroleum Safety and Environmental Management Authority for reasons kept secret from the public. However, the oil giant has put in a third submission and there will be no big surprise if it gets the tick from NOPSEMA this time around.

Fortunately for Labor and the Coalition NOPSEMA's decision is due after the election. With NOPSEMA's go-ahead, the  huge rig from South Korea will be on its way to the gulf, in the opposite direction to a multitude of whales swimming north for the breeding season, to be in place by next summer.

A look at the impact of BP's exploratory drilling-gone-wrong in the Gulf of Mexico might dampen some of the excitement. In total 4.9 million barrels of oil spewed into the ocean. The spill decimated local fisheries and tourism leaving 12,000 people jobless in New Orleans. The cost so far is US$56 billion and the ecological impact is catastrophic. Thousands of tonnes of oil remain on the gulf floor and the spill put oil up on 1,200 kilometres of coastline. Besides eleven human deaths, millions of other creatures died, including dolphins, whales, turtles and a myriad of fish right down the food chain.

In the middle of BP's world's-worst oil spill, Martin Ferguson, Labor's federal minister for resources, handed the same company a huge central region of the Great Australian Bight to drill for oil. He put no extra safeguards in place, never mind that he knew this region was to be declared a marine national park. Ferguson's decision was endorsed by his party and by the subsequent Coalition government. Australia's current minister for the environment, Greg Hunt, has raised no qualms. What's more Chevron is also lined up, to begin drilling in the Bight in 2017.

While the marvels of the remarkable marine ecosystem of the Bight remain far short of full scientific assessment, it is an important feeding ground for blue whales, the largest creatures ever to move on the face of the planet. Its waters also host right whales and humpbacks. While it is not yet established if seal colonies feed as far out to sea as the selected rig site, there is no doubt that colonies of New Zealand fur seals and the much rarer Australian sea lions along the spectacular cliff line of the Bight coast would be in extreme danger if oil were to spill from BP's experimental operation.

Tasmanians have a special interest in this looming threat to one of the world's last great wild and intact marine ecosystems. Our west coast would not escape a spill.

Mapping of the extent of an oil spill from BP's Great Australian Bight rig,  commissioned by the Wilderness Society in South Australia, shows the wild Tarkine Coast in the impact zone, along with the coasts of Kangaroo and King Islands. Were a spill to occur in summer the vast impact on migratory birds from the Arctic feeding right across the spill zone may well include, for some species, extinction. If a spill were to occur in winter the rest of the Tasmanian Bass Strait coastline as well as almost all of the Victorian coast, including and beyond Wilsons Promontory, would be polluted as well.

An increasing number of futurologists predict electric cars will predominate in many cities around the world by 2030. Whatever the case, the age of oil, the burning of which is a potent cause of global warming, is winding down. The question must arise: is wealthy modern Australia so bereft of foresight that it can readily put an ecological wonderplace like the Great Australian Bight at risk to a giant foreign corporation like BP with its stunning record of environmental disaster?

The  economy tops the polls as the issue of importance in this national election. On economic grounds alone I would urge voters to take a look at the environmental risk culpability inherent in the bipartisan Labor-Coalition backing for BP's giant oil rig to invade the dazzlingly pristine ecosystem of the Great Australian Bight. The Bight's nascent tourism industry is worth $1.2 billion annually and accounts for 10,000 full-time equivalent direct and indirect jobs. Its natural fisheries are worth hundreds of millions more.

There is little time for the majority of Australians, who know little or nothing of BP's plans to drill for oil in the Great Australian Bight, to decide if it is a mistake the nation as a whole is willing to make.