The Advocate: Why we need more people like Scott Jordan 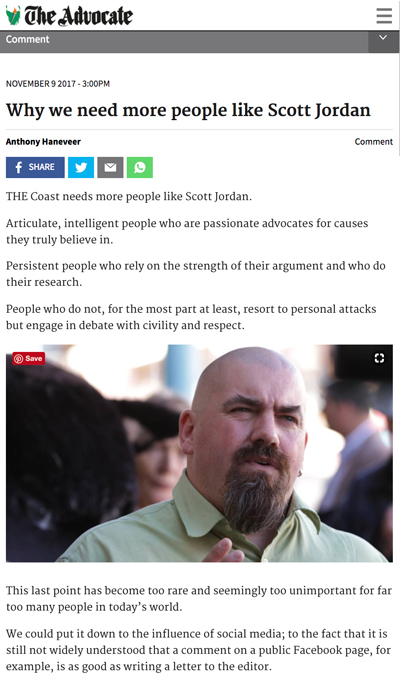 The Mercury - Talking Point: A chance meeting, an astonishing legacy 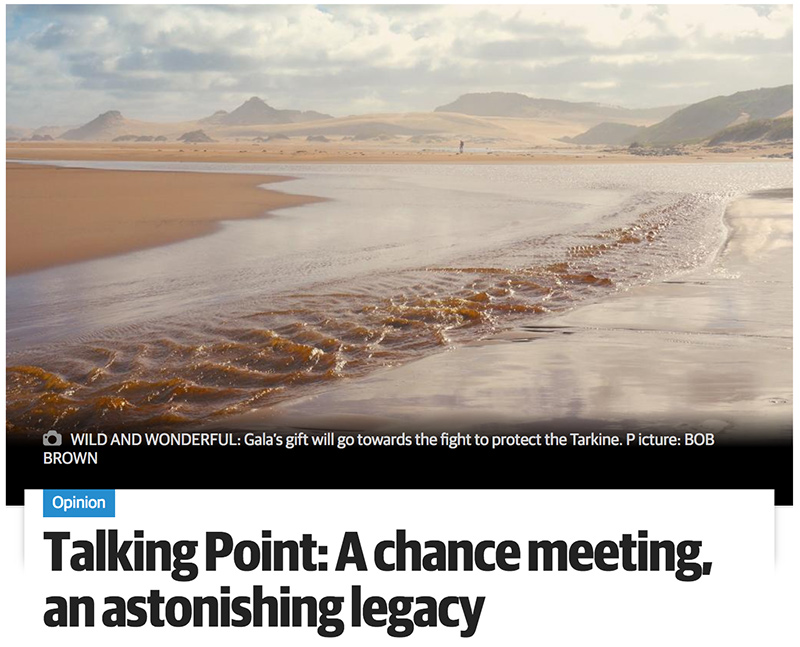 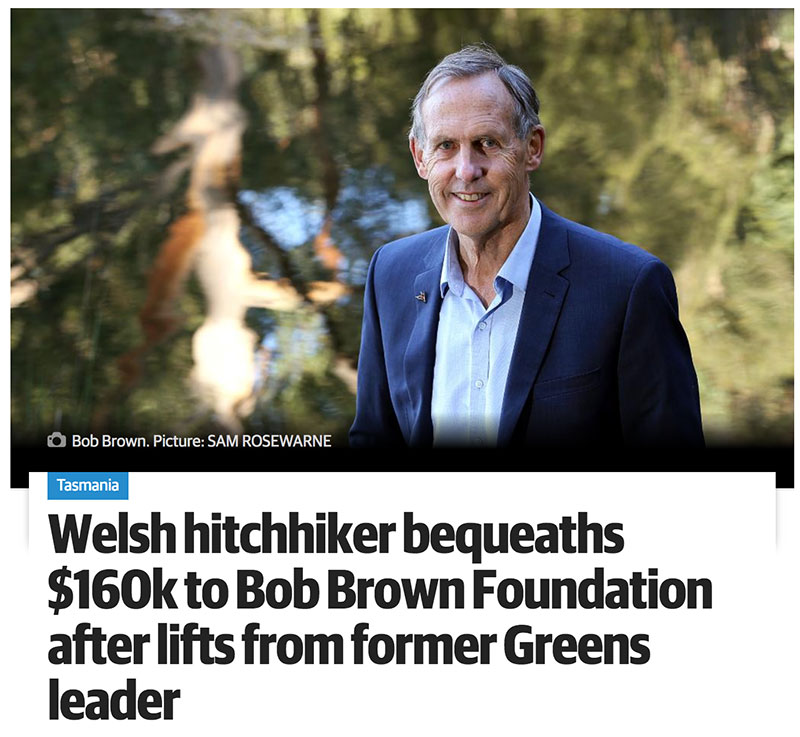 Markets For Change have released a Background Brief explaining the 2017 Federal Treasury's Tax Deductable Gift Recipient (DGR) Reform Opportunities Discussion Paper and how it may impact on eNGOs, their supporters and donors.

In June this year, the federal government though the Federal Treasury Department released a Discussion Paper reviewing how organisations which have Tax Deductible Gift Recipient status (DGRs, many of which are also charities) are managed. As acknowledged by the Discussion Paper, DGR tax arrangements are intended to encourage philanthropy and provide support for the Not-For-Profit sector (NFP). DGR status, along with other tax concessions to the NFP sector also encourages delivery of goods and services that are in the public interest. The initial one month consultation period on the Discussion Paper was belatedly extended from its original July deadline with submissions now due on Friday, 4th of August.

Please take the time to write a submission as suggested on page 6 of the Background Brief to support a strong and diverse environmental sector – including charities and other not-for profits – which is vital to ensure that Australia’s environment is protected, and that governments and businesses comply with their legal obligations and the rule of law. 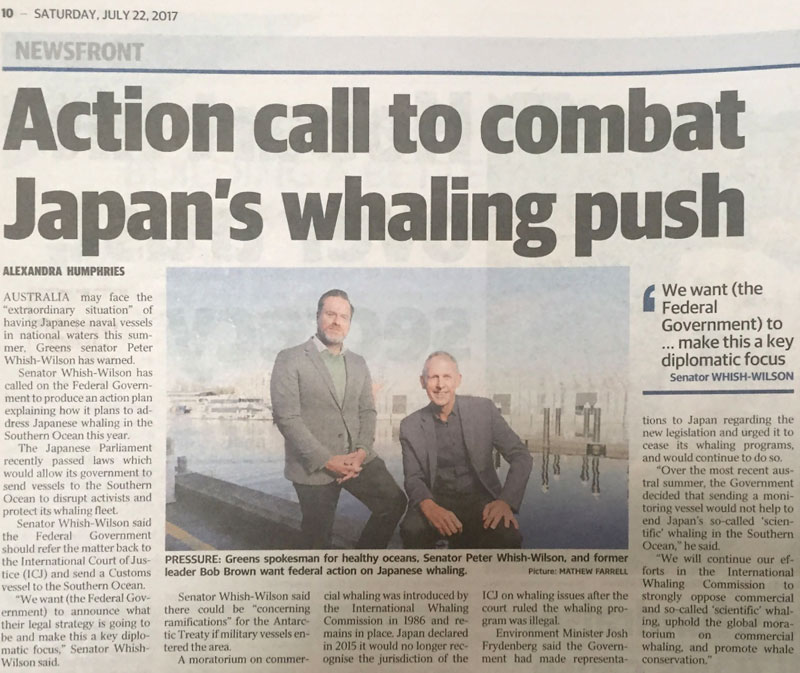 If you can't read the photo above, download the PDF version here (2.8MB).

At last! Christine Milne's great work for our Foundation in WA is leading to a national expose' of culpable handling of new industrial sites threatening the world's greatest rock art collection on the Burrup Peninsula.

This Sydney Morning Herald article underscores why the site should be World Heritage and not one for more industrial acid emissions. In the lead-up to next month's crucial WA state elections, if you know anyone west of the Nullarbor, please email them this article! 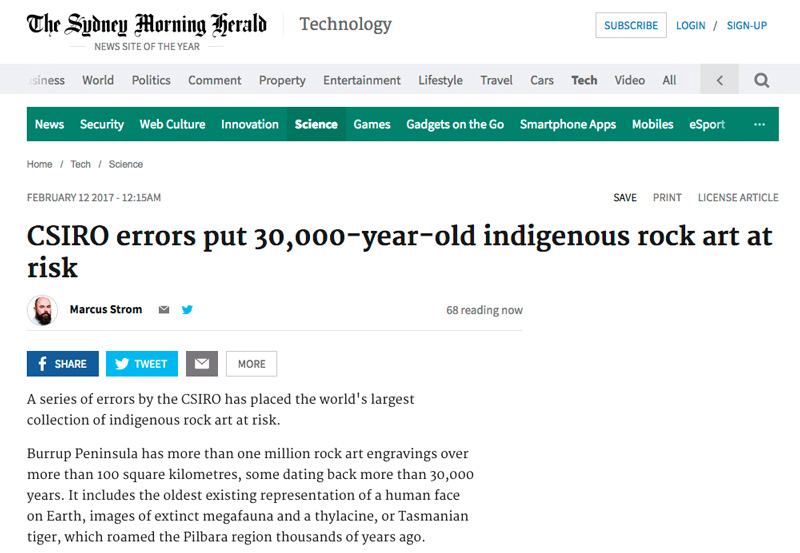 "Burrup Peninsula has more than one million rock art engravings over more than 100 square kilometres, some dating back more than 30,000 years. It includes the oldest existing representation of a human face on Earth, images of extinct megafauna and a thylacine, or Tasmanian tiger, which roamed the Pilbara region thousands of years ago.

The area is also the site of some of the biggest natural gas and ammonia fertiliser production facilities in the world. Emissions from this industry, in high enough concentration, have the potential to damage rock art." 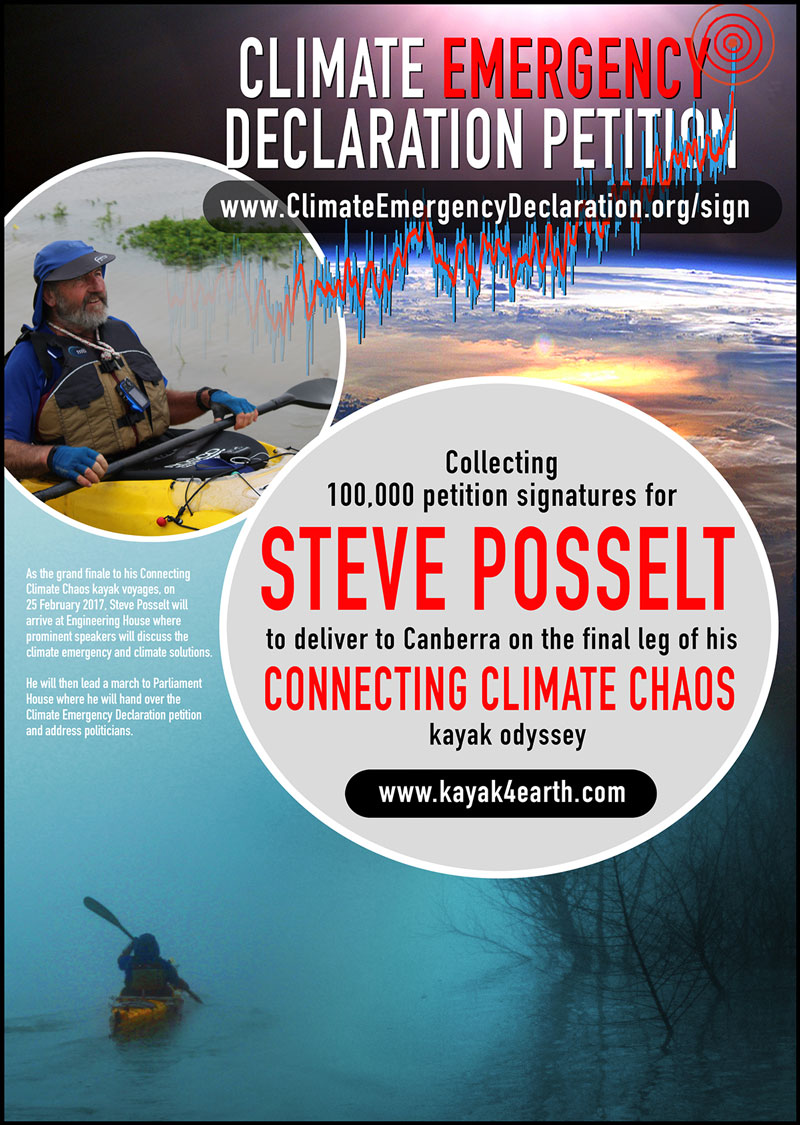 Steve Posselt is finishing his Connecting Climate Chaos journey with a paddle from Ballina to Canberra.

His goal is to help the Climate Emergency Declaration get to 100,000 signatures. There are over 12,000 signatures already - but there are only four weeks left of the trip. Show your support by going to www.kayak4earth.com or direct to http://climateemergencydeclaration.org/sign to sign the petition. 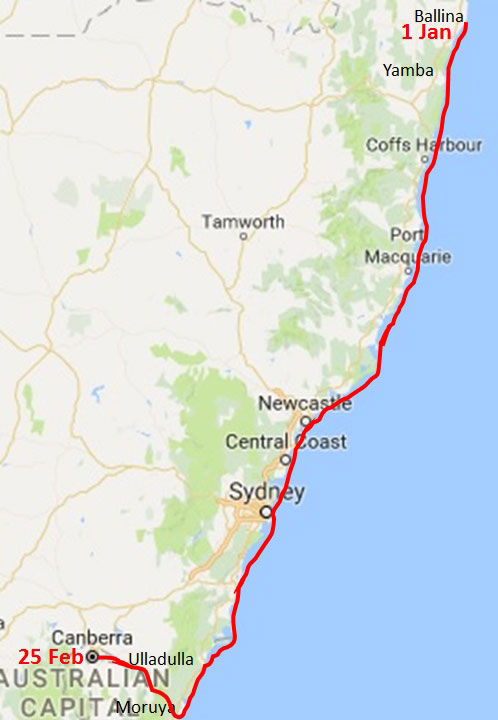 I thought my journey was over at Paris but it’s not. If absolutely everything promised at the Climate Summit is achieved we might limit global warming to three degrees. Three degrees means no Arctic or Antarctic ice, no glaciers and very likely no humans.

This is real, happening at present and for people under 20 now the effects could be catastrophic, not just the wild weather we are experiencing with just one degree of warming.

On New Years Day 2017,  I brought out Old Yella for one last time to paddle from my home in Ballina, where I recuperated from the gruelling Paris journey, to Canberra. The paddle is 1150km down the coast to Moruya, then turn right and drag  Old Yella 180km up the hill to Canberra.

The Guardian - Bob Brown's wisdom: I choose to be optimistic

The Guardian's "Wisdom of Ages" series has a video interview with Bob - watch it here. 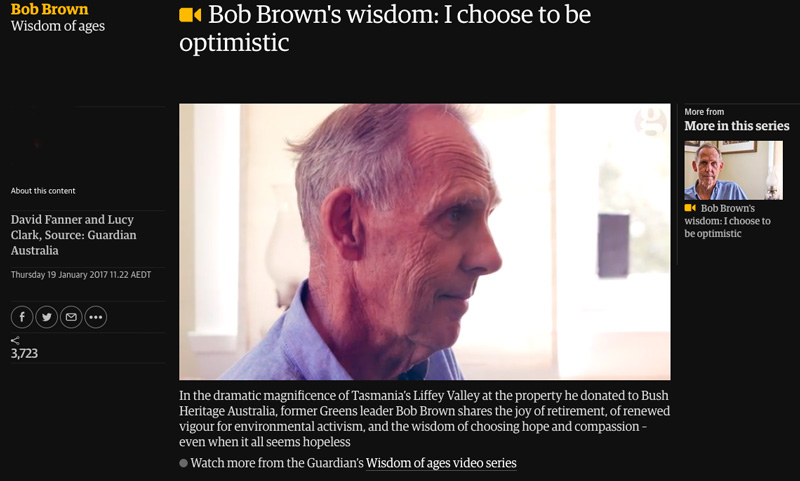 "In the dramatic magnificence of Tasmania’s Liffey Valley at the property he donated to Bush Heritage Australia, former Greens leader Bob Brown shares the joy of retirement, of renewed vigour for environmental activism, and the wisdom of choosing hope and compassion – even when it all seems hopeless"