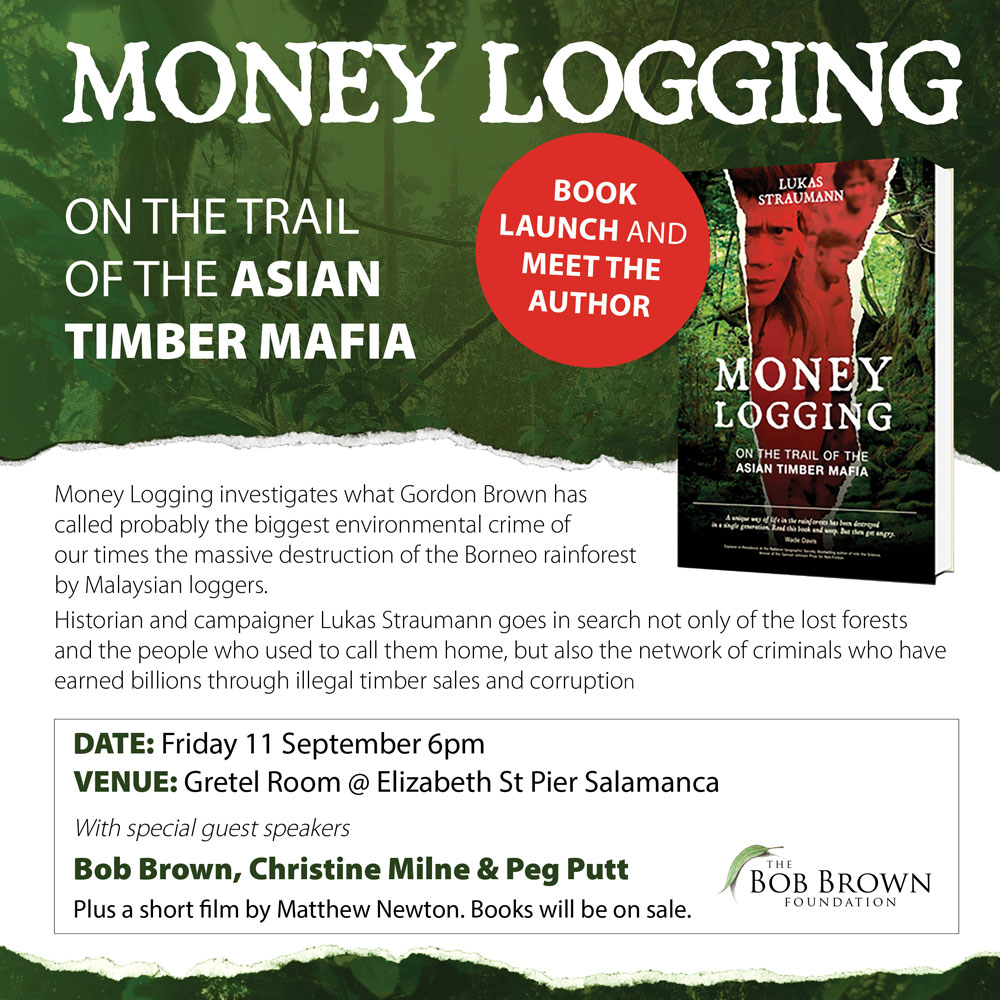 Lukas Straumann, the Director of Swiss based NGO Bruno Manser Fund, is visiting Tasmania's forests today and speaking at a public event in Hobart tonight. Bruno Manser Fund is an international human rights and environmental organization that champions the rights of the indigenous peoples of Borneo.

Straumann will launch his book 'Money Logging', an investigative account of what former UK Prime Minister Gordon Brown has called ‘probably the biggest environmental crime of our times’—the massive destruction of the Borneo rainforest by Malaysian loggers.

The Bob Brown Foundation welcomes this opportunity for a leading international organisation to present to Tasmania the controversial links we have with Borneo rainforest loggers.

"In 2005 Bruno Manser Fund was contacted by Bob Brown and Adam Burling when the Sarawak logging company, Ta Ann, was awarded a lucrative deal for Tasmania's forests . Since then, we have worked with Bruno Manser Fund to oppose Ta Ann's practices in Tasmania and Sarawak, and exposed the exported corruption and rainforest devastation that Malaysia's Taib family, involved in Ta Ann, brings to Australia", Bob Brown Foundation spokesperson," Jenny Weber said.

In Hobart tonight, Straumann will shed light on the connections fostered by Australia on behalf of Sarawak's controversial figure Taib and his family.

“The timber barons of Sarawak have thrived under the Taib regime. At a breathtaking pace, they are decimating forests in Southeast Asia, Africa, South America, and Australia. Ta Ann, which has close ties with the Taib family, plays a central role in the ­destruction of Tasmania’s natural forests," Lukas Straumann said.

“Of all the Malaysian timber corporations, Ta Ann has the closest ties with the Sarawak former chief minister. The company was founded in the ­mid-1980s by Taib’s cousin, Hamed Sepawi; the PBB politician Wahab Dolah (the PBB party forms Taib’s principal political power base); and the businessman Wong Kuo Hea. It was immediately granted huge logging concessions in Sarawak—and, of course, there was no such thing as a public call for open bidding. As chairman and principal shareholder, Taib’s cousin, Sepawi, is the strong man at Ta Ann. Insiders, however, suspect that Sepawi is merely a front man for Taib himself, who controls the corporation from behind the scenes,” Straumann said.