New attack: Bob Brown Foundation has been threatened with a $50 000 fine

In a new attack from the Gutwein bureaucracy, Bob Brown Foundation has been threatened with a $50 000 fine if it does not comply with demands from the Tasmanian Workplace Safety Regulator, Mark Cocker, by the end of this month. (Click here to read to full letter)

“We are not complying,” the defiant Bob Brown told media in Hobart today.

“This is Premier Gutwein’s bureaucracy being misused as a political weapon for the logging and rainforest destruction industry. Gutwein can’t win the public argument for needlessly destroying the ancient Tarkine rainforest and its wildlife. So he and the loggers are conniving to take our community of forest defenders out,” Bob Brown said.

THE media release could not have been more unambiguous.

There it was, in black and white. A statement by the Attorney-General Elise Archer and the Resources Minister Guy Barnett dated February 21, and available on the Tasmanian Government website a week later advising the “Government is aware and concerned that the unsafe workplace behaviours of the Bob Brown Foundation have caused significant angst in the community and referred the matter to WorkSafe Tasmania.” No matter how you choose to read this statement you can only come to one conclusion.

So why did Mr Barnett, interviewed by Lucy Breaden on the ABC that very same day (this columnist was interviewed on the same issue) contradict the statement about referral by stating that it had come from a member of the community? And why has Ms Archer done the same?

Now that the workplace regulator has had its misuse of power exposed last week with the Magistrates Court in Hobart declaring the notice issued to the Bob Brown Foundation only six days earlier declared to be unlawful, it is time to get some answers on what looks like a troubling development in this democracy.

The Greens have referred Mr Barnett, Ms Archer and WorkSafe CEO Mark Cocker to the Integrity Commission. As the NSW experience shows, politicians’ referrals of opponents to anti-corruption bodies is often just an attempt to smear. But in this case the referral is warranted.

There is no suggestion any of the parties referred have committed any type of criminal or civil wrongdoing, it’s the murkiness of the process deserves some independent scrutiny.

The question of the referral to WorkSafe Tasmania is critical. If a lobby group or individual who represents a particular political interest in the forestry and environmental debate space referred the matter, then a dangerous precedent has been set.

In a stunning victory, we have just returned from court where the WorkPlace safety regulator agreed to set aside the 'prohibition notice', effectively tearing it up.

This is a huge victory for the Foundation and a complete vindication of the right to peaceful protest.

We have a clear message for Tasmania's Gutwein Government. No matter how you threaten us, we will never stop our peaceful defence of Tasmania's forests.

We know they will try again, so we need to be ready to take them on. It is vital we succeed - if we don't, other governments around Australia could follow Tasmania's lead and turn important workplace safety regulations into tools for banning peaceful protest.

We will need tens of thousands of dollars to cover our legal costs for this case and future battles.

Will you help us to remain vigilant and defend the right to protest, whenever it is threatened? Your donation to our fighting fund will help us to mount swift and effective challenges to any future attempts to stop peaceful protests.

2017 High Court ruling: ‘The implied freedom protects the free expression of political opinion, including peaceful protest, which is indispensable to the exercise of political sovereignty by the people of the Commonwealth.’

The Bob Brown Foundation has thrown down the gauntlet to the Tasmanian Department of Justice over its edict banning all the foundation’s forest protest activities. Acting for the foundation, Hobart solicitor Roland Browne has, this morning, asked the Magistrates’ Court to find the WorkSafe Tasmania prohibition invalid on multiple grounds (see link below).

“The government Prohibition Notice, issued on Thursday by its WHS Regulator, will be found invalid, that is, illegal,” Bob Brown said this morning in Hobart. The Gutwein government’s authority does not extend to suddenly declaring all community protest sites as workplaces or to a blanket ban our protest activity in Tasmania regardless of how safe or effective it may be.

Logically, what or who next? The Westbury prison site paddock made illegal for Westbury residents? Rosny Hill banned as a protest site until the WHS Regulator is happy? The Parliamentary lawns off limits to everyone with a grievance? The streets outside every politician’s office or town hall? Public meetings inside town halls (the edict clearly bans BBF from holding these for now)? Every union protest site? This is a Gutwein government absurdity.

The Solicitor-General must be rubbing his head in despair as he recalls the 2017 High Court judgement after the Lapoinya forest protests validating peaceful protest in Tasmania’s forests under the Australian Constitution. If the Work and Health Safety Regulator issued this ground-breaking notice without notifying both his minister and the solicitor-general, he should go. If ministers knew, and did not get legal advice, they should go.

The WorkSafe supremo would have been doing a better job had he ensured the pro-logging vigilantes had not attacked peaceful citizens driving to their Tarkine ‘workplace’ on Friday night. What action is he taking there?

We see this edict as illegal and are continuing our peaceful defence of Tasmania’s wild and scenic Tarkine,” Bob Brown said.

The unprecedented use of workplace safety laws to try to curtail the right to protest is very concerning said the Australian Lawyers Alliance (ALA), following the news that the Bob Brown Foundation has been threatened with fines by WorkSafe.

“There is simply no evidence that work place safety has been jeopardised by these protests,” said Mr Greg Barns, Tasmanian barrister and ALA spokesperson.

“This is a misuse of government power and seems to be an unprincipled attempt to work around the fact that the government’s anti-protest laws were found to be unconstitutional by the High Court in 2017.

“This government seems determined to find a way to scare people away from expressing their views.”

Bob Brown Foundation has moved to place the Gutwein government-backed edict banning ‘all forest protest activities’ on giant trees scheduled for logging throughout the Tarkine. It will follow up in the Southern Forest’s Swift Parrot habitats and other to-be-logged areas of Tasmania’s wild forests.

Under the government edict it is illegal to remove, damage or deface such notices, which must be displayed in ‘a prominent place’ and doing so ‘may incur a maximum penalty of $5,000 for an individual or $25,000 for a body corporate’. Sustainable Timber Tasmania, Ta Ann and Britton are body corporates.

‘If loggers remove, damage or display these notices on trees they are about to slaughter, they become liable to a $25,000 fine. So I presume they will have to calculate whether each tree is worth more than $25,000 to their profit line,’ Bob Brown said in Hobart today.

‘On first look, it does seem that WorkSafe Tasmania, acting with the Gutwein ministers’ collusion, has offered a tactic to bring a halt to logging in the island state’s contentious forests. And, of course, this intervention will rightly focus attention on what an unnecessarily dangerous industry old growth logging is.’

Responding to the edict today, Bob Brown said that the government edict may end up being an own goal.

’Meanwhile, this foundation was set up to defend Tasmania’s wild and scenic heritage and we will continue to do so. There are about a dozen citizens up at Sumac Ridge’s cathedral-like rainforest in the Tarkine, continuing their devoted work in protecting one of the world’s last great unprotected rainforests. Premier Gutwein should be ashamed that he is destroying rather than guaranteeing this magnificent Tasmanian asset. 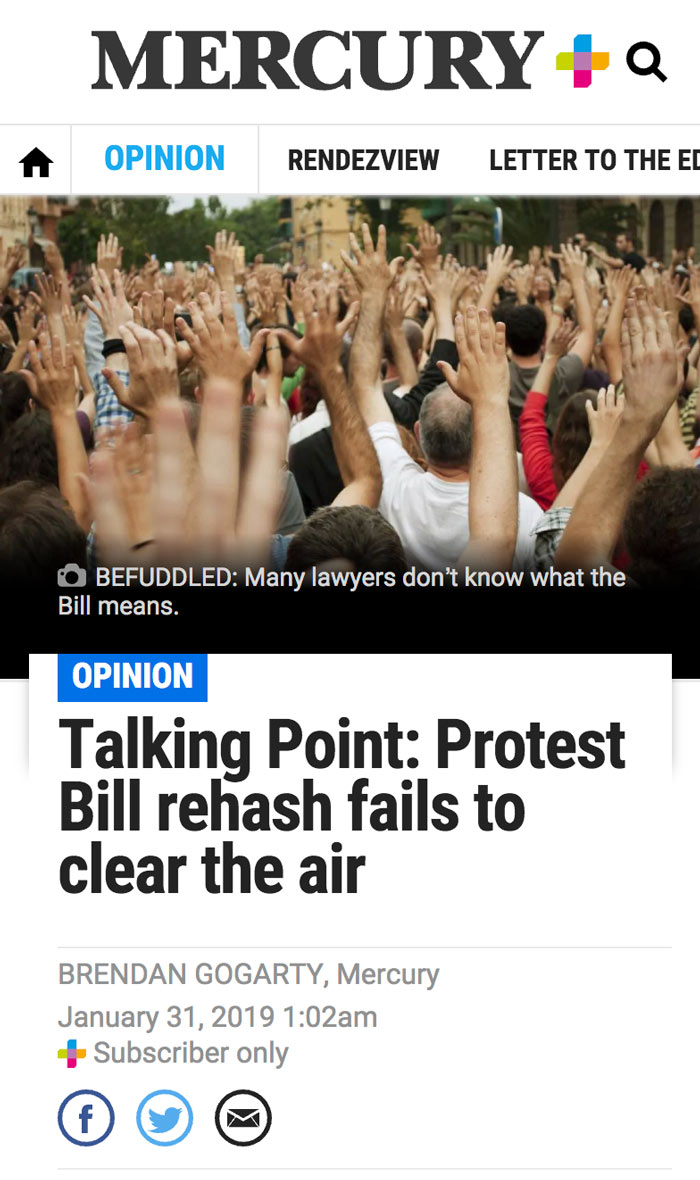