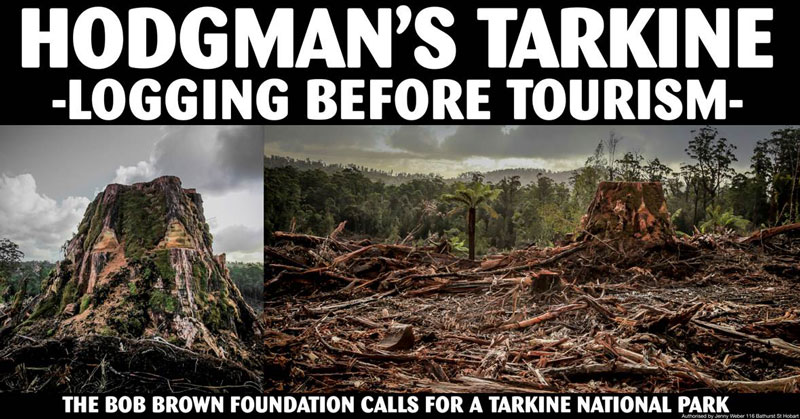 Hodgman’s Government continues to damage tourism benefits for the NW region while logging the scenery, as conservationists protest at Executive Building in Hobart today.

Subsidised logging of Australia’s largest temperate rainforest wilderness in the Tarkine and the threat of forest furnaces under pending federal legislation is spelling serial erosion for one of the world’s last wild places.

Save the Tarkine’s Campaigner Scott Jordan said, ‘Tax-payer subsidised logging managed by Forestry Tasmania is occurring in old growth and rainforests. The equivalent of 40 AFL football grounds is being lost right now in the Tarkine.’

Bob Brown Foundation Campaign Manager Jenny Weber said, ‘Tourism initiatives for the Tarkine in the absence of secure protection, fly in the face of the wild natural beauty tourists come to see facing destruction. Premier Hodgman will promote himself as supporting tourism in the Tarkine by opening a tourist road this week. But at the same time he is backing the logging of forest coupes that surround the route. This is an extraordinary failure to understand what tourists to the Tarkine appreciate.’

‘Woodchipping the Tarkine, logging rainforest timbers for Britton Brothers, and delivering logs out of the Tarkine for the controversial company Ta Ann to sell into Japanese markets, is beginning to impinge on Australia’s largest temperate rainforest wilderness’, Jenny Weber said.

‘The biggest new threat to the ancient forests of the Tarkine is the inclusion of burning native forests as part of the Renewable Energy Target. The Tarkine should be a National Park, not a woodpile for forest furnaces,’ Jenny Weber said.

‘Tourism for the Tarkine will deliver 1100 jobs with forest protection while jobs in subsidised logging of the Tarkine’s unique forests are diminishing. Logging in the Tarkine is costing the taxpayer while protection as a National Park and World Heritage listing would bring substantial and ongoing economic gains for the regional economy,’ Scott Jordan said.

The Bob Brown Foundation and Save the Tarkine are calling for a National Park and World Heritage listing for the Tarkine.