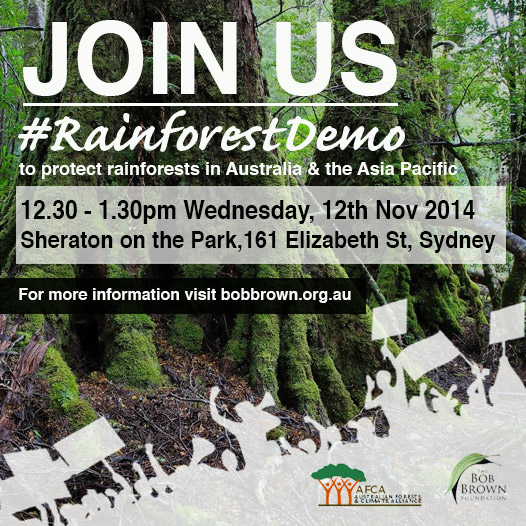 On November 12 in Sydney, leaders will be gathering at the Asia-Pacific Rainforest Summit, to make decisions that will affect the future of rainforests in Australia and in our Asia-Pacific region. The Australian Government is hosting the Summit.

The Bob Brown Foundation and the Australian Forest and Climate Alliance have a plan to make sure the delegates, the government and the public knows what’s really going on in the rainforests around Australia and the Asia Pacific region.

Or join a coalition and contribute to our statement on the day, or conduct a demo on your threatened rainforest or town in solidarity?

We'll be holding a demonstration in Sydney outside the Sheraton on the Park. With a big banner, flags, information and placards advocating for the protection of the regions unique rainforests. Groups from around the country and in our region will be joining us, including campaigners from Papua New Guinea, where rainforest destruction also threatens species and the livelihoods of indigenous people.

Take Action with; leaflets to delegates as they leave the hotel, hear from guest speakers, and inform people that highlighting problems in our neighbours’ backyard is disingenuous when we fail to lead by example in our own backyard.

Please help make this peaceful demonstration a strong one and let the delegates at the summit hear our voice for the forests.

The Australian government certainly has no shame in giving itself conservation credentials by hosting this Summit. It is positioning itself as an ally of rainforests, when nothing could be further from the truth.

The Federal Government has failed to recognise, let alone protect, one of the most intact and globally significant cool-temperate rainforests on Earth in the Tarkine, plus tried to remove unique Tasmanian rainforest ecosystems from the World Heritage List. World Heritage rainforests in the Wet Tropics  and in South East Queensland and Northern NSW face a range of threats that the Federal Government is doing little or nothing to meet.

Worse still, we have a pretty good idea what Australia’s leaders will want to doon November 12. We believe the government plans to pledge to move towards zero net deforestation of our rainforests. Sounds good? Well it is really just means that loggers can clearfell a rainforest with ancient trees, plant seedlings or hope for regeneration and claim no deforestation. It's the government propping up the dying native forest logging industry and pandering to developers and mining interests.

It isn't good enough. We want the government to pledge zero deforestation, protection of forests from degradation, and restoration of degraded forests. Protection and rehabilitation. No clearing and planting.

Our unique ecosystems and wildlife and those of the Asia Pacific must be protected and the only way forward is to stop the destruction. 75% of this country’s rainforests have already been cleared for agriculture, mining and urban development. They now cover only 0.5% of the continent. It's vital that we do not lose more forests and more wildlife.

WHERE: SHERATON ON THE PARK, 161 ELIZABETH STREET SYDNEY

WHAT TO BRING: Posters, placards, or just come as you are. We'll have materials to hand out. If you are feeling adventurous you might like to 'dress' for the occasion, as a rainforest bird or animal.