In its third year, then senator Bob Brown gave the 2012 Green Oration, celebrating the 40th anniversary of the Tasmanian Greens and speaking about his vision for the next 40 years. 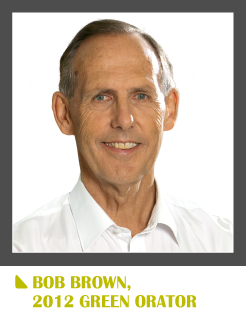 His oration was held exactly 40 years after the world’s first Greens party meeting – a tumultuous affair – was held on 23 March 1972 in the Hobart town hall.

Bob outlined his vision for the future of the Greens and Global Democracy and his optimistic plan for future governance.

In 2012 the Greens had 10 MPs in the Australian Parliament, 25 in state parliaments, including two ministers in Tasmania, and more than 100 local councillors, and had come a long way from its humble beginnings in 1972.